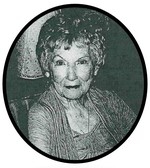 Edna Margaret Folsom de Larios left this world peacefully in South San Francisco to join her beloved Jose’ on April 28, 2020. She was born in Reno, Nevada, on May 25, 1919, descended from Nevada pioneer families of Bath, Fulstone, and Folsom.
The adored daughter of Ellis John Folsom and Margaret Pohle Folsom, Edna was raised on her parents’ dairy ranch outside of Carson City, graduated from Carson High School, and attended Stanford University where she earned Bachelors and Masters degrees and her teaching credential. She married Jose’ on March 22, 1942, in the Stanford Memorial Church. They shared 57 years together before his death in 1999.
A devoted educator she taught school in Sutter’s Buttes and Sequoia Union High District before her long career in the South San Francisco Unified School District as a teacher, counselor, drama coach, dean of girls, and assistant principal - all at South San Francisco High School - and as the first principal of Westborough Junior High School. Giving back to the community was a passion she shared with her husband. Among the many organizations in which she was involved were a number of PTA’s, The American Field Service Committee, Family Service Agency Auxiliary, Girl Scouts and Boy Scouts of America, the Buri Buri Women’s Club, the San Mateo County Historical Society, the South San Francisco Historical Society, South San Francisco Library Board, League of Women Voters, San Mateo County Genealogical Society, Los Californianos, Folsom Family Association, Association of California Administrators, Western Association of Schools and Colleges Accreditation teams, San Mateo County Parks Commission, Parliamentarian Association, and PEO. Edna was a founding member and past president of Soroptimists International of Northern San Mateo County and past president of the South San Francisco Women’s Club and leader of the Melody Belles, where she shared her love of music and dramatics by orchestrating musical productions for the club. She was gifted with a beautiful singing voice and participated in many church choirs throughout her younger life, directing choirs in Carson City and later at San Bruno Methodist Church. She was proud of her heritage and belonged to National Society of Daughters of Founders and Patriots, Daughters of the American Revolution, serving as Regent twice, and Daughters of American Colonists, serving two years as its State Regent at the age of 90.
She was a gourmet cook and gracious hostess. She loved planning and hosting dinners for friends, coworkers, faculty, and family. Family dinners reminded her of her childhood when the extended family gathered at the ranch for holidays. Until her parents’ deaths, she never missed a Christmas in Carson City, even during World War II when she and Jose’ were stationed in Oklahoma before he was sent to lead a platoon on the planned assault of Japan. Education of her own children and those in her care was a guiding principle in her life. Edna loved her country, her home state, and her adopted home of almost 80 years.
A loving presence in their lives, Edna is survived by her children Boyd de Larios, Francisca Larios Hansen, Joseph de Larios, grandchildren Francesca Anderson, Alexander Hansen (Anne Wintroub), Christian Hansen (Janet Hansen), Monica Rosenfield (Ian Rosenfield), Margaret de Larios (Jordan Miles), and great grandchildren Jillian and Boden Anderson, August and Arlo Wintroub Hansen, Soren and Isaak Hansen, and Juliette, Annabelle, and Archer Rosenfield. Edna is predeceased by her daughter-in-law Kathleen McCaffrey and son-in-law Roy Hansen.
There will be a simple visitation Friday, May 1 from 3-5 p.m. at Garden Chapel, 885 El Camino Real, South San Francisco. A private family burial will be held at Lone Mountain Cemetery, Carson City.
If you wish to make a donation in her memory, the family suggests the South San Francisco Public Library, 840 West Orange Avenue, SSF 94080.

All rights reserved. This obituary is also archived at obittree.com